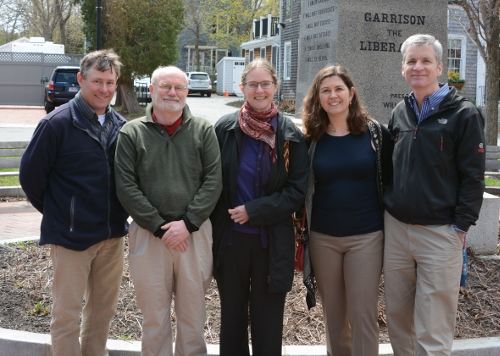 Jim Kelly and Bob Morrison from Sudbury, Kaat Vander Straeten from Wayland, Elizabeth Youngblood from the MassCEC, and Jim Hutichinson from Lincoln in Newburyport for the Solarize Award.

NEWBURYPORT – April 19, 2017– Today, as part of the Commonwealth’s Earth Week celebrations, the Massachusetts Clean Energy Center (MassCEC) and the Department of Energy Resources (DOER) announced the selection of five communities and three nonprofit organizations to participate in a pair of solar energy programs developed and administered by the state. Lincoln-Sudbury-Wayland, Newburyport, and Winthrop have been selected to participate in Solarize Mass, a community-based solar group purchasing program that can deliver savings of up to 21 percent on solar costs compared to the statewide average to residents and local businesses. Additionally, Mass Energy Consumers Alliance (Mass Energy), the Cape and Islands Self Reliance Corporation (Self Reliance) and the Marion Institute have been selected to participate in the 2017 Mass Solar Connect program, a solar group buying program for members of participating nonprofit organizations.

“Massachusetts continues to lead the nation in clean energy solutions, propelled by a business climate that encourages and enables new innovative technologies,” said Governor Charlie Baker. “The Solarize Mass Program and the Mass Solar Connect Program are two great examples of our Administration working with communities and nonprofits to reduce greenhouse gas emissions across the Commonwealth, while simultaneously bringing energy costs down for the people of Massachusetts.”

“By forming meaningful partnerships with municipalities and nonprofits, our administration is able to better deliver reliable clean energy solutions through initiatives like the Solarize Mass Program and the Mass Solar Connect Program,” said Lieutenant Governor Karyn Polito. “We look forward to working with municipalities across the state and other stakeholders as we continue to prioritize and expand the state’s clean energy portfolio.”

For the second time since 2012, residents of Newburyport, Lincoln, Sudbury and Wayland will have the opportunity to benefit from the program, as these communities opted to participate in the Solarize Mass Plus program in which the public was able to pair solar electric systems with the purchase of solar hot water systems, air source heat pumps, or electric vehicles for discounted pricing. While the Lincoln-Sudbury-Wayland communities selected discounted solar hot water systems, the City of Newburyport selected air source heat pumps.

“It is extremely important that we continue to support and provide clean energy solutions that are readily available to the citizens of the Commonwealth,” said Energy and Environmental Affairs Secretary Matthew Beaton. “The benefits of promoting solar power and other green technologies are numerous, including the lowering of energy costs, decreasing the state’s dependency on fossil fuels, reducing harmful greenhouse gas emissions, and creating a cleaner environment.”

Under the Mass Solar Connect program, Massachusetts-based members of Mass Energy Consumers Alliance (Mass Energy), the Cape and Islands Self Reliance Corporation (Self Reliance) and the Marion Institute will have access to reduced pricing through an online platform. Their collective 35,000 members will be able to compare solar costs online, helping them to pay lower prices for their solar installations. Furthermore, members of Mass Energy will partner with EnergySage, while Self Reliance and the Marion Institute will partner with Pick My Solar.

“Massachusetts continues to be a national leader in solar and that is due in large part to our municipal partners who understand the importance of renewable energy,” said Department of Energy Resources Commissioner Judith Judson. “The new Solarize communities and nonprofits are taking an important step in helping us build a clean, affordable, and resilient energy future for the Commonwealth.”

Since its launch in 2011, 58 cities and towns have participated in the Solarize Mass Program, resulting in more than 3,400 new small-scale installations at homes and businesses totaling 20.6 megawatts of solar capacity. Additionally, in 2015, Mass Solar Connect Program was launched, and has resulted in a total of 1.9 megawatts of solar, enough to offset over 1,700 metric tons in annual carbon emissions. Massachusetts currently has 1,488 megawatts of solar installed statewide, enough to power more than 227,000 homes.

“Solarize Mass is an inventive program that is helping us to both achieve our clean energy goals and support taxpayers,” said House Speaker Robert A. DeLeo (D-Winthrop). “I’m proud that my hometown of Winthrop – which has long been a leader in protecting the Commonwealth’s natural resources – has been chosen to participate and I thank MassCEC for its work to aid our municipalities.”

“Programs such as Solarize Mass provide opportunities for communities like Wayland to continue their mission towards achieving clean energy practices,” said State Senator Richard Ross (R-Wrentham). “Access to solar energy not only benefits the environment, but may also bring energy savings to consumers.”

“Partnerships such as Solarize Mass have become an integral part to the Commonwealth’s leadership in emission reduction.” said State Representative James Kelcourse (R-Amesbury). “We are excited to continue working with the administration to further our renewable energy programs in the First Essex District.”

“Congratulations to Newburyport for being one of only five municipalities in the state selected to take part in the Solarize Mass program, a partnership between the Massachusetts Clean Energy Center and the state’s Department of Energy Resources, focused on expanding public to access solar energy products,” said State Senator Kathleen O’Connor Ives (D-Newburyport). “This will result in residents being able to purchase solar air source heat pumps at discounted prices and I applaud Mayor Holaday and Recycling & Energy Manager, Molly Ettenborough for pursing this opportunity.”

“I am pleased that Lincoln-Sudbury-Wayland were chosen as a group to participate in Solarize Mass,” said State Representative Alice Peisch (D-Wellesley). “Not only does this worthwhile program enable communities in the Commonwealth to pursue clean energy options, it also helps in reducing the cost of solar for consumers, which in turn allows more individuals to take advantage of this energy source.”

“I’m extremely pleased to see that MassCEC has welcomed Sudbury to participate in the Solarize Mass program,” said State Senator Jamie Eldridge (D-Acton), who also serves as the Senate Vice-chair of the Senate Committee on Climate Change and Global Warming. “I have seen the positive impact of the Mass Solar program in several of the other communities that I represent, increasing the number of residents who have solar on their homes, and helping reduce energy costs while combatting climate change.”

“Mass Energy is thrilled to be partnering with the MassCEC and Energy Sage on a new Solar Connect program,” said Mass Energy Program Director Eugenia Gibbons. “The 2015 inaugural program was so successful that we are excited to again be helping our members and affiliates gain access to competitively-priced solar PV. Two years ago we were able to help more than 250 Massachusetts homeowners install rooftop solar affordably. This was equivalent to removing nearly 361 cars from the road. The installations completed through Solar Connect will help members reduce their carbon footprints, contributing to the state’s GWSA goals, while also contributing to Massachusetts leadership on clean energy programs.”

“Self-Reliance has a long standing commitment to facilitating well-sited renewable energy installations in the Commonwealth as a way to keep more of our energy dollars in the local economy, build a stronger regional workforce around the clean energy industry and help reduce our collective emissions that are disrupting the climate,” said Self-Reliance Executive Director Megan Amsler. “We are very excited to be part of the Solar Connect with the MA CEC and Pick My Solar program to help more people make solid choices about photovoltaics and take action to generate their own clean energy.”

MassCEC and DOER are currently accepting community applications for the 2017 Solarize Mass and Solarize Mass Plus programs. Funding is provided by the Renewable Energy Trust, which was created by the Massachusetts Legislature in 1998. The Trust is funded by a systems benefit charge that is paid by customers of investor owned utilities and municipal electric departments that have opted into the program.