Thank you to everyone who came out to vote at Town Meeting on April 3. 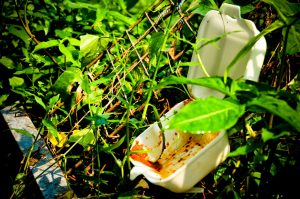 For health and environmental reasons the Polystyrene Food Container bylaw eliminates food establishment use of polystyrene food and beverage containers and service items such as lids, straws and utensils. In its blown form it is commonly referred to by its Dow Chemical trademark name “Styrofoam”. In its rigid form it is identified by the type 6 recycling symbol, although small items may lack such marking.

The bylaw encourages the use of environmentally friendly alternatives and preserves the ability for food establishments to use other non-toxic forms of plastic.

Cheryl Judd, head of food service for the Wayland Schools, has eliminated the use of Styrofoam in the school lunch program in Wayland.

20 other Massachusetts cities and towns have a polystyrene ban. Small towns and large municipalities such as Cambridge, Somerville, Brookline and Pittsfield have bans. Nearby, Concord has a ban more stringent than the Wayland bylaw.

The effective date is 1/1/18 allowing time for the affected Wayland food establishments to use up existing inventory and to adapt. The bylaw allows an establishment to apply for an extension if there is a hardship.

Responsibility for this bylaw has been assigned to the Board of Health (BoH) because there are human health issues associated with polystyrene. The estimated cost of $1000 allows for direct costs such as mailings and postage.

This bylaw is a step on the way toward sustainable packaging:

Overwhelmingly cities and towns that have experience with a polystyrene ban have had a positive experience. (The petitioner has interviewed officials in South Hadley, Concord, Great Barrington and Brookline.) Overwhelmingly the implementation costs have been minimal, volunteers have often been active in the implementation, compliance has been excellent and there are no reports of economic hardships having resulted. Once a food establishment converts to alternative containers there is little probability of going against the bylaw and reverting to polystyrene.

There are environmental, health and potential economic benefits from banning polystyrene single use food and beverage items.

Polystyrene is based on styrene, a neurotoxin and probable carcinogen (U.S. Department of Health and Human Services, “Styrene”, Report on Carcinogens, Twelfth Edition, 2011, p. 383-391). Polystyrene is the only plastic used in food packaging that is based on a carcinogen. Polystyrene resin usually contains a small percentage of residual styrene (the legal limit in the U.S. is 1% and 0.5% for fatty foods. Source: Code of Federal Regulations 21CFR177.1640.). Styrene leaching increases with temperature and with certain foods (alcohol, oils or fat) (M. S. Tawfika & A. Huyghebaerta, “Polystyrene cups and containers: Styrene migration”, Food Additives & Contaminants, Vol. 15, Issue 5, 1998, pages 592-599.)

The manufacturing of polystyrene can potentially cause much greater harm to workers, and to the general population through chemical releases in the environment. Polystyrene manufacturing involves many other highly toxic materials such as benzene and naptha. Some scientists have called for polystyrene to be classified as a hazardous material (Nature, “Classify plastic waste as hazardous”, vol. 494, p. 169-71.).

Polystyrene food items are a litter problem. The foam form is very light so that, even when properly disposed of, they often blow away.

Polystyrene foam easily breaks down into small pieces that can escape from the garbage truck, transfer station, boat, and average consumer’s hands – and are then carried into lakes and waterways, and eventually into the ocean. Polystyrene items make up the fifth through seventh largest type of litter from land-based sources found on U.S. coasts (Ocean Conservancy, “International Coastal Cleanup 2013 Report”, p. 14.).

Polystyrene items harm wildlife. The foam form in particular is often mistaken as food by both domesticated and wild animals. At least 267 marine species worldwide have been reported to have been affected by polystyrene litter.

Polystyrene will photodegrade in the presence of light, but this takes about 200 years. When polystyrene items finally do break down, they do not dissolve into benign substances: they just fracture into smaller and smaller bits called “microplastics.” These particles present the greatest long-term danger because they displace food supplies in the world’s oceans. Once microplastics enter our oceans, they will stay there virtually forever. Removing them is not possible.

Polystyrene is almost never recycled due to its low value (Only 0.2% of polystyrene food service packaging in California is recycled according to California Integrated Waste

Management Board (December 2004), ”Use and Disposal of Polystyrene in California: A Report to the California Legislature,” Table 4, Page 14.).  Wayland does not recycle it.  There is a cost to the Town associated with sending this bulk material out of Wayland. Reducing polystyrene material at the transfer station may help the town control waste and recycling costs. The bulky foam form is not accepted in curbside recycling programs. The rigid form even when collected curbside is never recycled.

There is a concern that there may be a cost to the town for implementation and enforcement. The Transition Wayland volunteer group is prepared to conduct outreach and education for the Board of Health. For monitoring the BoH can rely entirely on citizen complaints, thus removing any added burden to the food establishment inspection process.

Once a food establishment stocks alternatives there is little probability that they will break the law and go back to polystyrene. National chain establishments will certainly comply with the law. They are already familiar with this in other cities and towns including large cities and towns such as Cambridge and Brookline. Compliance has not been an issue in towns that have polystyrene bans.

Because compliance has not been an issue in other towns and because some Wayland businesses are already in compliance, one might argue that a campaign aimed at voluntary compliance might be more appropriate than a bylaw. There are important reasons why a voluntary approach is not viable:

Experience shows that a national chain establishment will comply with a law but will not voluntarily abandon the company’s standard practices or internal policy.

Small merchants want fairness, “a level playing field”. As one Wayland owner stated, “I have no problem with a ban as long as it applies to everyone”.

Some might argue that the ban should be at the state level, not the town level. A state level ban may ultimately become law but momentum for a state-wide ban will not realistically occur without the continuing momentum of bans such as ours at the town and city level.

Town Board Affected: Board of Health

ARTICLE: To determine whether the Town will vote to amend the Town Bylaws by adding a Bylaw for the reduction of polystyrene use, as follows:

Polystyrene contains dangerous substances which when heated release toxic chemicals that may be carcinogenic. Eliminating polystyrene food and beverage containers is in the best interest of the health and welfare of the inhabitants of the Town of Wayland. Expanded polystyrene food containers form a significant portion of the solid waste going into our landfills. Polystyrene is not biodegradable; once buried in a landfill it will remain there for centuries.

2. “Food Establishment” means an operation that stores, prepares, packages, serves, vends, or otherwise provides food for human consumption. Food Establishment shall include any fixed or mobile place, structure or vehicle whether permanent, transient, or temporary, private, public or non-profit, routinely serving the public; or any other eating and drinking establishment or place in which food or drink is prepared for sale or for service to the public on the premises or elsewhere. School cafeterias are included in this ordinance.

3. “Polystyrene” means and includes blown polystyrene and expanded and extruded foams (sometimes called “Styrofoam,” a Dow Chemical Co. trademarked form of EPS insulation) also referred to as expanded polystyrene (EPS), which are thermoplastic petrochemical materials utilizing a styrene monomer and processed by any number of techniques including, but not limited to, fusion of polymer spheres (expandable bead polystyrene), injection molding, form molding, and extrusion-blow molding (extruded foam polystyrene); and in this bylaw is referenced as “Foam Polystyrene.” Foam Polystyrene is generally used to make cups, bowls, plates, trays, clamshell containers, meat trays and egg cartons. The term also means and includes clear or solid polystyrene which is also known as “oriented,” and referenced in this bylaw as “Rigid Polystyrene.” “Rigid Polystyrene” is generally used to make clear clamshell containers, and clear or colored straws, lids and utensils.

5. This bylaw shall be known as the Polystyrene Food Container Bylaw.

Except as provided herein, Food Establishments are prohibited from dispensing Prepared Food to customers in Disposable Food Service Containers made from Polystyrene.

This bylaw shall take effect six (6) months following approval of the bylaw by the Attorney General or January 1, 2018, whichever is later. Upon application of the owner or the owner’s representative, the Board of Health may exempt a food establishment from the requirements of this section for a period of up to six (6) months upon a finding by the Board of Health that (1) the requirements of this section would cause undue hardship; or (2) a food establishment requires additional time in order to draw down an existing inventory of polystyrene disposable food service containers.

5.1 Enforcement of this bylaw shall be the responsibility of the Board of Health. The Board of Health shall determine the monitoring process to be followed, which may be limited to responding to citizen reports, and/or incorporating inspections into existing food establishment inspections.

(2) Enforcing persons: Board of Health

If any provision of this bylaw is declared invalid or unenforceable the other provisions shall not be affected thereby.