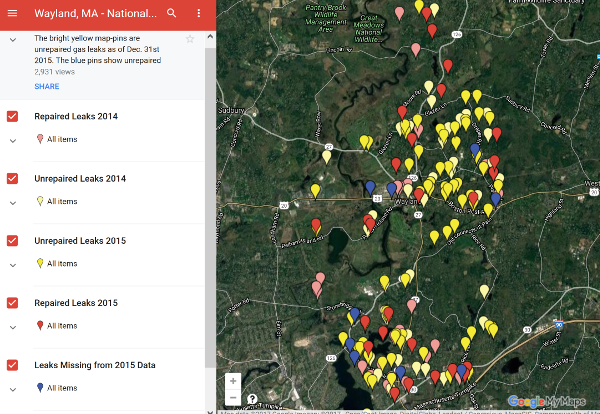 In August 2015, HEET published a report on natural gas leaks in Massachusetts. HEET (Home Energy Efficiency Team) is a  nonprofit that has mapped natural gas leaks in over 180 municipalities, our town of Wayland among them. Want to see if there is one near you? Click on Wayland in this list and see where the known leaks are, and notice how many go unrepaired, year in, year out.

Natural gas is our major fuel here in Massachusetts. It is how 50% of our buildings are heated and 59% of our electricity is generated. Since it delivers more heat per pound of carbon dioxide at a lower cost, it is considered a “bridge fuel” to a more efficient renewable-energy economy.

However, there are problems with this rosy image. The gas is sent to our homes and buildings primarily through pipes under the street. The oldest type of pipe is made of cast iron. Some of these iron pipes have been in the damp ground for decades and are in bad repair. Over 50% of the pipes in Boston are over 50 years old. As the pipes corrode, especially along the joints, they begin to leak natural gas into the ground, where it percolates up into the atmosphere.

Why do we need to insist that these leaks be fixed:

What can you do?

Support State Legislation. Although Massachusetts is one of the states with the most leak-prone natural gas infrastructure, methane leaks are not unique to Massachusetts. It is a nationwide problem. By fixing the problem in Massachusetts, we can help lead through example for other states. Representative Lori Ehrlich and Senator James Eldridge are sponsors of two current bills that, if passed, will help solve the problem. Both bills have more than 50 cosponsors, meaning there is a good chance they can get passed. The more voters that speak out in favor of these bills, the better the chance is.

Call your Representative to support these bills.

This bill prohibits the utilities from passing the cost of wasted gas onto consumers, incentivizing the utilities to fix the leaks as quickly and cost effectively as possible. When a similar bill was passed in Texas, 55% of the leaks were fixed within 3 years.

This bill requires that whenever a street is already open for construction, gas companies check and repair all gas leaks. Repairing leaks before repaving is not only cheaper for the utilities, it also decreases the chance the street will need to get opened up soon afterward for pipeline repairs, reducing future street repaving needs (and costs) for the local municipality and disruption for nearby residents.

There is much more we can do. If you are interested in working on this in Wayland, let us know!