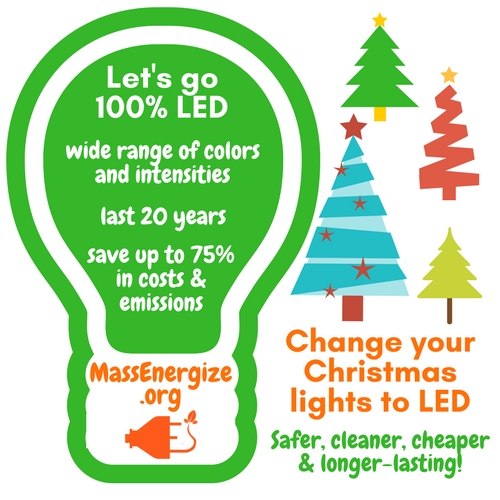 The folks of MassEnergize launched their ambitious, Wayland-grown pilot with a Light the Way Campaign that puts a spotlight on lighting efficiency and electricity consumption.

Fight climate change, one bulb at a time?

Almost! Light the Way is one initiative in a long string of actions that our neighbors can take to reduce their greenhouse gas emissions.

MassEnergize is a program run by Wayland volunteers. They research actions, some easy like switching to renewable electricity, some free like no-cost home energy assessments, some more involved like solar technology and electric vehicles. Then they find partners for each of those action. They even have a partner who will pick up food scraps and return it as compost.

These volunteers know that people want to do something about climate change. But how, in our busy lives, to even begin researching and prioritizing actions, let alone selecting a program or a company? Now well-informed MassEnergize volunteers have done the homework and found local, often non-profit partners.

And every action counts. Yes, even changing a light bulb!

Lighting is one of the largest single electricity end uses. According to the U.S. Energy Information Administration, residential lighting consumption was about about 10% of total residential sector electricity consumption in 2016, almost as much as commercial and institutional buildings, and public street and highway lighting combined (11%).

So switching to LEDs means that homeowners use much less electricity for lightning: 80% less if they switch out the old incandescents, and 60% if they switch out the compact fluorescents (CFL’s). Even replacing just the most used bulbs (about half in a household) often results in about 2/3 reduction in a home’s lighting energy.

The savings in greenhouse gas emission are typically about 1 ton of carbon reduction per home per year. To put that in perspective, if we all switched to LED lights, the impact on carbon emissions would meet a whole year’s worth of progress to achieving a carbon-balanced world by 2050.

And switching to LEDs saves about $15-30 per month on the electricity bill. A good-quality LED light bulb costs $1-2 and will save you $100 over its life if it replaces an incandescent, $40 if it replaces a CFL. They are also much longer-lasting. But the offers of great LED bulbs at that price may be fleeting, so it’s worth it to do this soon.

The Town itself is fully on board. Wayland is in the process of replacing all of its 750 or so street lights to LEDs, with estimated savings of 282,500 kWh and around $65K a year.

“Switching to LEDS undoubtedly has an impact,” stresses Harvey Michaels, who proposed the Light the Way campaign to the group in the first place. “LED’s give inexpensive, excellent light, but they are only used in less than 13% of fixtures. Can we reach 50% use of these great bulbs in our community this year alone? Let’s find out!”

Go to www.MassEnergize.com for information on where to find good, inexpensive LED bulbs and advice on which will fit your setting.  While there, explore other actions as well, and let the MassEnergize volunteers know what you’ve already done. You can also subscribe for updates, or leave a comment or story.