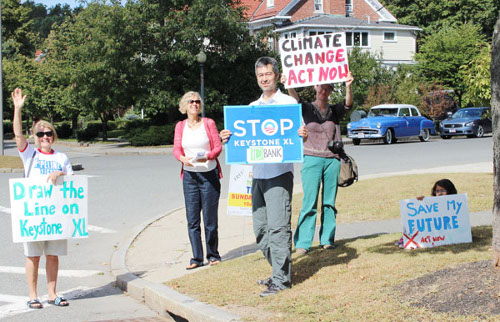 On Saturday, September 21, several Wayland residents joined over fifty others from the Metrowest at Newton Centre to “Draw the Line” on the Tar Sands Pipeline, which would deliver tar sands oil from Alberta, Canada to Gulf Coast refineries, mostly for export to the international market. 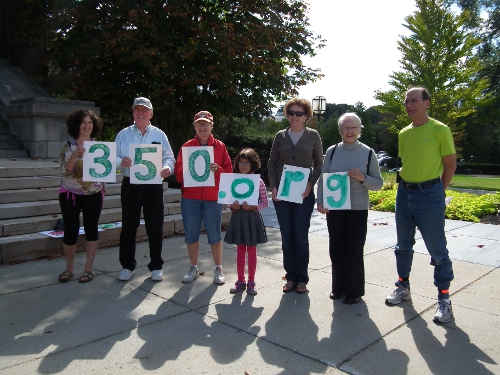 This action, coordinated by the international environmental group 350.org, was one of hundreds of events across the nation to remind the President to keep his promise on climate and reject the Keystone XL pipeline. Environmentalists say the extraction of oil from the tar sands will contribute dramatically to climate change. It will have the carbon footprint equivalent of building more than seven new coal-fired power plants or putting over 5 million new cars on our roads each year.

Marcia Cooper, President of Green Decade Newton, which organized this particular action, also expressed concern that processing heavier, dirtier tar sands oil would increase the amount of toxic pollutants in communities near the refineries that are already suffering from high rates of asthma and cancer. “And the pipeline will cross more than 1,000 water bodies across 3 states and 875 miles,” Cooper added, “threatening drinking water for people, farms, and ranches with a devastating tar sands spill.”

There was no shortage of solutions proposed by the participants of the action. Bob Morisson, of Sudbury, supports a tax on carbon, and Nathan Phillips of Newton, Professor of Earth and Environment at Boston University, says that “Transcanada and its investors, like TD bank, tout KXL as the biggest US infrastructure project. It’s time to leave fossil fuels behind and build a national electric vehicle charging infrastructure instead, and drive it with renewable energy. That is the kind of big, distributed infrastructure we can all support and benefit from.”

The crowd at Newton Centre, from the eight-year-old with her “Save My Future” sign to the 80-year-old who expressed grave concern for her grandchildren, demonstrates that the threat of climate change touches many. “

“And that number is growing,” says Kaat Vander Straeten of Wayland. She mentioned the regional 350 Massachusetts (350MA.org), which is experiencing explosive growth. In just six months, it has gone from a single base of operations in Cambridge to become a network of nodes across the state, serving Cambridge, Boston, North Shore, South Shore, Worcester, and Pioneer Valley.

“The Metrowest is about to add to this network,” said Jennifer Riley, also of Wayland. “All Metrowest residents who are concerned about climate change are invited to the first 350 MetroWest node meeting on November 7, at 7:30, at the Fairbank Community Center in Sudbury,”